Excel Poll Results are in!

Thanks to all of the subscribers who contributed to our ‘Which Excel version are you using?’ poll – results are in, and we have some very interesting feedback!

When Excel 2007 was first released four years ago, it caused division amongst analysts and financial modellers, with many vowing to “stay as far away from it as possible”. The new ribbon layout has been described as “chaotic”, “not intuitive” and one poll respondent says it “does my head in”!   From a Financial Modelling perspective of course, model structure, layout and best practice is far more important than the fancy new tools introduced by Excel 2007, and many modellers have shunned the new version for the past few years in favour of its more primitive predecessor.  It can certainly take some getting used to, but there are many new features which make it worthwhile, such as new functions, increase file size and additional charting options and tools.

These new features were added to even further with the introduction of Excel 2010 last year.  Not surprisingly, there has been a much greater takeup of this “new-fangled” version in the past few years; in fact the latest poll shows that 75% of users have migrated to 2007 or 2010, compared with a mere 29% as captured by a similar Plum Solutions survey conducted only two years ago.

The pie chart below shows the split between the three different versions: 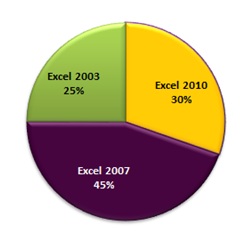 Go to the full Poll results on Linked In

Key findings from the Poll: