Named Ranges – a Must-Have for Modellers?

Those new to named ranges sometimes struggle to see the benefits of including them in financial models. It’s true that most of the time named ranges are not entirely necessary, but there are some good reasons to use named ranges when building a model:

In general, named ranges just make your life easier as a modeller.  They make your formulas neat and tidy, easier to read and follow.  There is no rule to say that you must have named ranges in your model, but any experienced financial modeller will make good use of named ranges in their models.

What is a Named Range, Anyway?

Excel allows you to select a single cell, or a range of cells, and give it a name. You can then use the name to move to the cells and select them, or include them in a formula.

In Figure 1, we have used an absolute reference to anchor our formula to the consistent price of $450.

This cell is called B2, and this won’t change; however, we can also change the name of it to something else. 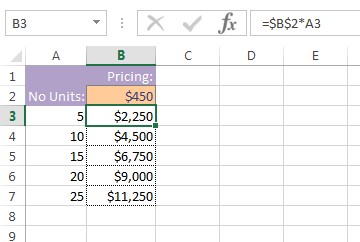 How to Create a Named Range

Note that the name must not contain any spaces or special characters. For instance, if you want to call it Year 1 Price, you’d need to call it Year1Price or Year1_Price.

Named ranges don’t necessarily need to be confined to only a single cell; you can also create named ranged for an entire range of cells, and these can be used in formulas. Simply highlight the range instead of a single cell, and type over the name as shown above. 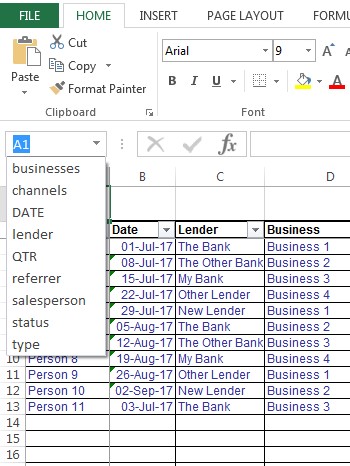 Excel will then move to and select the range. It does not matter what sheet you are in when you select the name. This can make finding your way around the named ranges in a model much faster.

Another example: If you have created the range name Costs for all the cells in a column containing your numerical costs data, you can calculate the total costs using the formula =Sum(Costs).

A cell does not need to be an input field in order to assign a name to it, although it often is in financial models. The cell can also contain a formula as well as a hard-coded input value.

Named ranges can be useful, but it’s not good practice to have too many. They can be confusing, especially if you have not used a consistent naming methodology. It’s also quite easy to accidentally name the same cell twice. So in order to keep names neat and tidy, you might need to edit or delete them.

Also, if you have added more data to a spreadsheet, and a range name no longer expresses the correct range of cells, you can redefine the named range.

How to Edit or Delete a Named Range

On the Formula tab, in the Defined Names group, click on the Name Manager. Here you can add, edit, or delete existing named ranges.

The only difference between Windows Excel and Excel for Mac in this instance is that you can add comments to named ranges in Windows. Also, it is called a Name Manager in Windows, but otherwise works in exactly the same way as it does in Excel for Mac.

Named Ranges are a recommended prerequisite for Plum Solutions Financial Modelling courses.  Look for online courses and workshops running in your area.