Waterfalls and Other New Charts in Excel 2016

Now that the Introduction to Financial Modelling course as well as my book Using Excel for Business Analysis has finally been updated for Excel 2013 after several months of hard work, you can imagine my surprise and delight when the preview of Excel 2016 became available for download 🙂

Nonetheless, it was with great anticipation that I downloaded the new Office 2016 preview which was released recently and yes, it’s true – they HAVE included a Waterfall chart template, hip hip hooray! Waterfall charts have increased in popularity in recent years, and often cause many modellers quite a headache as they can be very tricky to build. Most analysts have got their own templates, or use different add-ins to achieve this effect. One of the easiest ways to create a waterfall chart in previous versions of Excel is using the fairly simple Up/Down Bar method, however, it is only possible to have two different colours, one for positive and one for negative values which is quite restrictive. This is no longer a restriction with the new template, and creating the waterfall chart is now a relatively painless process in Excel 2016.

The chart below was created in just a few minutes with a minimum of fuss and without the formulas and testing normally associated with creating a waterfall chart. It was with great dismay, however, that I noticed that the option to have rounded corners had disappeared! Let’s hope that is rectified in the final version…. 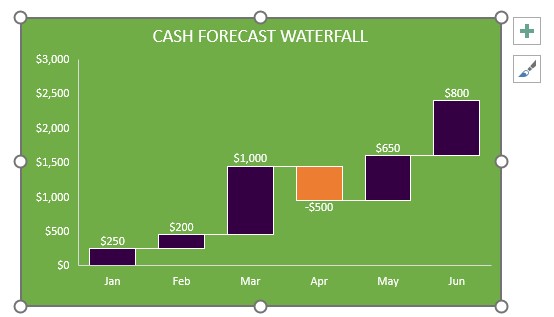 Besides the greatly anticipated waterfall chart, other useful new chart types are Histograms, Pareto, Box Plots (Excel calls them Box & Whisker), Treemap and Sunburst.  More on these when I get a chance to review them and use them in my models.  Boy, and I was excited when the Combo Chart came out in Excel 2013!  With the rise in the importance of data visualisation and visual representation, it’s not before time and it’s great to see that Excel is maintaining (or at least attempting to maintain!) its relevance as a data analysis tool.