Which version of Excel am I using?

No, it’s not a silly question and since the “Modern Excel” was introduced in 2010, the changes have been pretty subtle and it can be a little difficult to tell the difference.

Open up your version of Excel.  If it looks like the image below, then congratulations, you’re using the brand spanking new Excel 2016!  The easiest way to distinguish 2016 from its predacessors is that it is the only version which has got the new “Tell me what you want to do” at the top which is suspiciously like the Office Assistant Paperclip but far less annoying.

See this recent blog article for an overview of What’s New in Excel 2013 as well as Excel Top Ten Tricks in 2016.

If it has capitalised Ribbon, but not the “Tell me what you want to do” then you’re using Excel 2013, as shown below:

If it looks something like this, you’re using Excel 2010.  Note the rounded File Menu in the top left-hand corner:

If it looks something like this, you’re using Excel 2007.  This is the only version that has the Microsoft Office button in the top left-hand corner.

If it looks something like this, you’re still using Excel 2003 (and it’s really time for an upgrade!)

Of course if you hit the button (if you have a button in the top left-hand corner, you’re using 2007!) or the File Menu, go to Account and About Excel which should tell you your version as shown here: 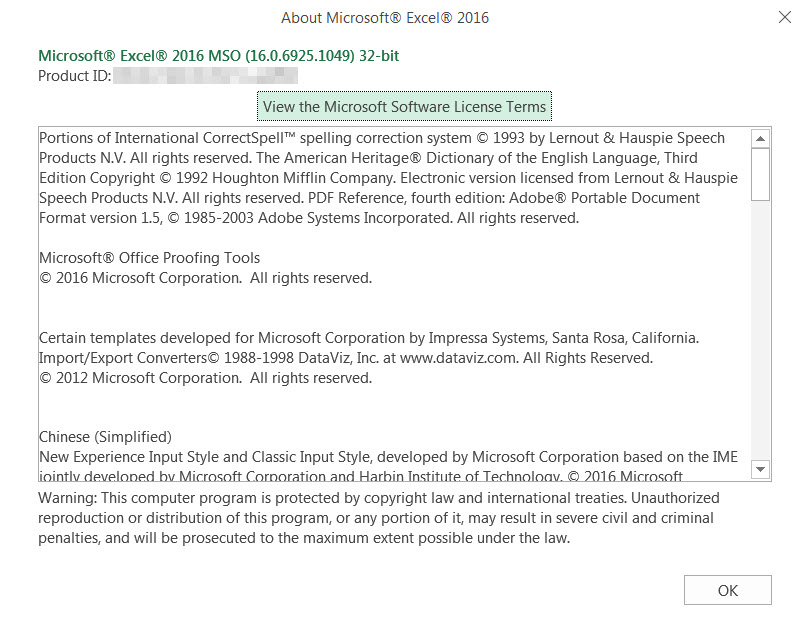 For more information on Excel 2016, see this free online course segment on What’s new in Excel 2016.  This segment forms part of the Financial Modelling in Excel series of courses, and includes free Excel template downloads, links, PDF transcript and 6 minute video.  In this informative video we explore the major differences between different versions of Excel, and learn critical skills for working with those using different versions. Whichever version you are using, your modelling will be impacted by the changes and differences in functionality between versions.

If you are attending one of our online courses or workshops, it does not matter which version of Excel you are using as the course notes cover all recent versions.