Which Version of Excel are you Using? Poll Results 2012

Now that Excel 2013 preview is available, I thought it was time to do another poll to see what version of Excel business users are on now.  It’s been around 18 months since the last poll on Excel Version Usage, and I was interested to see if there had been more of a shift towards the new versions of Excel.

Go to the full results on Linked In

As expected, the take-up of Excel 2010 has increased, and 2003 decreased, although around 10% of users are still stubbornly holding on to 2003 despite the fact that it is no longer sold by Microsoft.  In fact, one poll respondent commented rather testily that she was not “stuck” with 2003 (as the poll suggested) but that she actually preferred it. 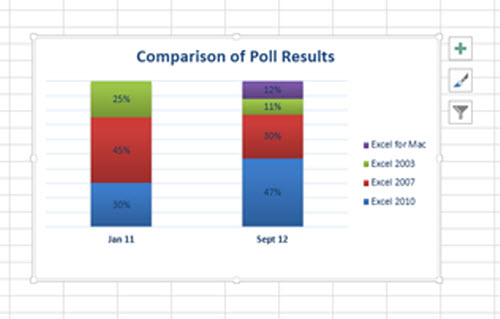 Of course I could not resist creating this chart in the new Excel 2013 just to show you what it’s like!

The first survey did not ask how many people were using Macs and we can only assume that either Mac users did not respond to the survey, or else selected the corresponding Windows version (for example Excel 2008 for Mac corresponds to Windows Excel 2007).  I think we can assume though that due to the increased market share of Macs in recent years the use of Excel on a Mac has also increased – in fact more people surveyed were using Excel on a Mac than were using Windows Excel 2003!

Although, as the name suggests, Excel 2013 won’t be released until early 2013 but you can download a preview of Excel 2013 here.  There is not a huge difference between versions, but some of the key differences are:

I’ve had a bit of a play with it and initially the look and feel is quite different to 2010 – there is certainly a much bigger change this time than there was between Excel 2007 and 2010.  Not too much has been moved around though and once you get used to the different look, you’ll be up and running in no time!