Financial Modelling Champions; where are the girls?

Last month I posed the question why, yet again, we didn’t see any female faces in finals of the 2017 ModelOff Financial Modelling World Championships. Boy, did that open a can of worms. I was inundated by public and private messages of both support and rancour, and I was blown away by some of the responses, particularly the private comments along the lines of “Women aren’t good at Financial Modelling because it’s just not in their nature” by a genuinely well-meaning gentleman who felt the need to very sweetly mansplain the reasons behind the low rates of female participation. Wow, it’s worse than I thought.

The lack of female representation in the financial modelling industry as well as in the ModelOff competition has always bugged me but hey, it’s a competition of skills and the best candidate won. End of story, right? I’m not so sure any more. All of the current research tells us that girls are doing as well as boys at high school and that STEM subjects are no longer considered purely the purview of ‘the boys’ with girls also topping many science subjects.

So why are there so few senior females in finance, and why, with the exception of Hilary Smart’s victory in 2013, do we continue to see no female faces at ModelOff, when I know there are plenty of well qualified women? Where are they, and why aren’t they represented?

Besides my obvious qualifications as a female financial modeller and author I’m no diversity expert but I feel a responsibility to try to understand and explain the reasons behind the disparity and hopefully make some positive changes for future competitions. I’ve been working closely with the organisers at ModelOff who are keen to encourage more women to enter, and to achieve our goal of at least one female face in the 2018 finals.

Without turning this into a battle of the sexes, I’d like to lay out some of the arguments I received. Basically, the lines of reasoning fall in to the following areas:

What problem? I don’t see an issue at all. None of the women made the grade but neither did anyone over the age of 44.

This is – to my mind, the most insidious of all arguments because it promotes the status quo. If it wasn’t an issue, why the disparity? It didn’t occur to me that I’d need to articulate the problem because to me it’s perfectly obvious that every industry at its peak should have a representation of both male and female but judging by the response, it seems that it needs to be spelt out. This is a systematic problem; a case of nurture, not nature (despite what my mansplaining friend seems to think). We need to challenge and change the status quo.

The ModelOff competition is being organised and promoted by mostly white males and attracts mostly white males. We need to figure out how to break this “circular reference” (forgive the pun) by adding a few more women into the mix.

Lack of gender diversity is bad for everyone in the financial modelling industry for many reasons but the one that bothers me the most is that it discourages other women from entering this field. If a new female finance or accounting graduate considering her career prospects, sees no other women at the top – or even near the top, it makes her wonder if she can make it. She wonders if it is worthwhile pursuing a career as a financial modeller if she’s unlikely to make it to the top. With a lack of female role models, she’s more likely to pursue a different career.

The ModelOff Competition brands itself as the pinnacle of achievement in the industry. Ask yourself, men, if you saw a page full of women in the ModelOff competition, would you feel like it was a place you should definitely head to for a career – or would you consider that maybe this group, being all women, probably isn’t a place for you to thrive. Who will mentor you? Who is like you? Who will you shoot the breeze with about life? Do you think ‘new graduate you’ would have seen a group of white women 20 years older than you and thought – yes, my place is here, I’ve found my calling? Consider the future of your daughters, do you only want your sons to achieve and be recognised or do you want your daughter to have the confidence to stride forward in any career she chooses? Women like New Zealand’s Prime Minister, Jacinda Ardern who has just announced she is planning to have her baby and go back to leading the country after six weeks are certainly great role models for aspiring career women who also want to have a family.

Women have better things to do. They aren’t interested in competing

I’m wondering what better things women have to do…maybe they’re home cooking dinner for their families if some of the responses I received were anything to go by; while their husbands are working late improving their skills? There are highly skilled female financial modellers out there. A glance at my own LinkedIn connections shows that roughly 20% of those who are confident enough of their skills to list “financial modeller” in their title are women. This is a woefully small percentage, considering 52% of all new accounting graduates are women but even if perhaps only 20% of financial modellers are women, then out of 16 finalists we should be seeing at least 3 female finalists, so surely we can get at least one, if not more, to make it to the finals?

I’m convinced that there’s no conscious or unconscious bias in the questions or in the way the competition is run. One of the three judges is Maria Shevchenko and 2013 champion Hilary Smart is on the question design team. But the competition simply doesn’t attract its fair share of female competitors. Possibly one of the reasons for this comes down to the way the event is promoted and the gung-ho, take-no-prisoners approach of the marketing in previous years, such as calling the finals “The XL Smackdown”. I can recall attending the first ModelOff Meetup in Sydney which had remote control cars racing around the room. No prizes for guessing who the target market was! I’ve asked many women why they haven’t entered, and although the competition results are never made public, they often just don’t want to compete even if they are confident of their skills. Research suggests that women simply aren’t motivated to compete against others, but are happy to compete against themselves, so an approach of “beating your personal best” would be more attractive to female competitors. 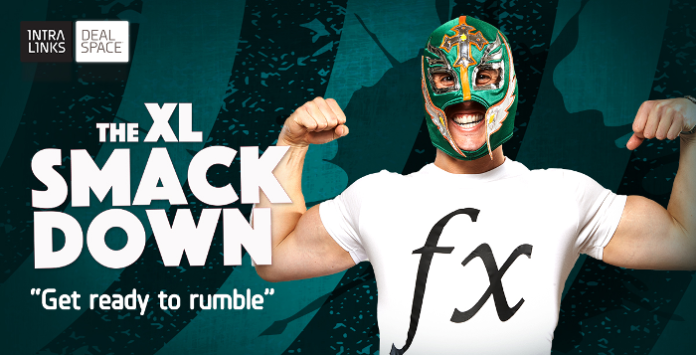 By raising this as an issue you are reducing the achievement of the men who worked hard to get there.

Not at all. Those who make it to the finals should be very proud of their achievements and can enjoy the status of having been a “ModelOff Financial Modelling World Championship Finalist” right throughout their career and champions even have to suffer Excel geeks bothering them for fan pics at every function they attend.

To join in the conversation about this topic, please see this post on LinkedIn.